Our mission is to invest in companies that are outstanding in their field.

We are a harbor in which they can develop their unique capabilities in the long term.

Odyssey 44 is a family office and was founded in 2014 in Prague. It manages the wealth of the Kúšik family. Its founder, Martin Kúšik, has been active in the investment business for almost 20 years as a partner of Penta Investments. The primary objective of Odyssey 44 is to invest into exceptional businesses which consistently create value for their customers and employees. We are convinced that by exceeding their expectations, long term value growth will follow.

We are looking for investments that fulfil the following criteria:

We invest into businesses with the intention of holding them forever. We are not focused on any particular industrial sector. The minimum investment size we will consider is €20 million equity. We do not invest into start-ups. 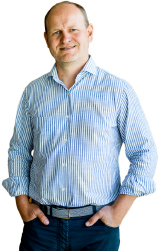 We often say together with my wife that

It is with this principle that I want to run our family business. It means only doing things that interest and motivate us so that we can have enjoyment from our work and at the same time work with people who have similar values, pleasure from working and self-realisation.

Martin Kúšik was born in 1969 in Bratislava. He is a graduate of law from Charles University in Prague and completed a year of study of law and economics at Univeridad Complutense in Madrid. After a short time of practicing law and private investing he founded in 1994 together with four of his schoolmates Penta Investments. Martin Kúšik grew with Penta from its initial beginnings as a stock broking firm to its development as one of the largest investment businesses in the central European region. In 2013 he decided to leave Penta and invest his capital in his own family business in 2014 through the foundation of Odyssey 44.